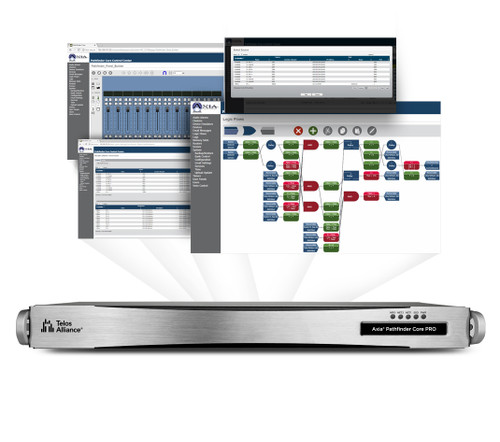 Pathfinder Core PRO—either Appliance or VM—is a toolbox with powerful features that create efficient workflows and facility management. For one, it unifies your Axia device monitoring and control, letting you make system-wide changes from one central place—the Pathfinder Core PRO web interface. Pathfinder Core PRO simplifies routing in complex facilities, even those with thousands of audio sources and destinations, by giving the user easier, more intuitive control over audio workflows. This third generation of Pathfinder routing control lets you customize and command your Axia network with streamlined functionality, including Logic Flows—a flow-chart-style events system that makes events easier to create, adjust, and monitor in real-time. An efficient, intuitive web interface means easy configuration and monitoring from any device, and customizable user interfaces provide streamlined control over your entire Telos Alliance system. Finally, this Linux-based appliance or VM makes full use of the processor while freeing you from a Windows-based server.

Broadcasters worldwide are migrating key infrastructure and processes to virtualized platforms. Whether in company data centers or third-party server farms, broadcasters in radio, television, and other digital media are finding significant benefits in equipment and process virtualization.

Axia Pathfinder Core PRO VM is the virtualized monitoring and control solution for Axia Livewire+™ AES67 facilities. Many IT departments have standardized on one or two server hardware platforms, and perhaps a single hypervisor solution. This standardization is good business practice with benefits for operations, maintenance, upgrades, and redundancy

Today’s broadcast IT and operations teams appreciate standardization, functionality, and redundancy. Pathfinder Core PRO VM may be installed in a selection of hypervisor environments, including VMware, Hyper-V, VirtualBox, Proxmox, and Stratus.

Thanks to installation and deployment options, the VM version of Pathfinder Core PRO lends itself to centralized deployment, allowing monitoring and control of routing and Axia equipment for a network of studios and remote Axia locations.

Joining the Axia Pathfinder Core PRO family is Pathfinder Core Pro VML. The VML delivers all the same features as VM, but has a lower starting price point as it comes with 300 connections (as opposed to VM’s 1000 connections), making it perfect for a smaller system with just a studio or two. If the workflow expands, no problem. Simply apply add-on license points to the server and expand system control.

The Axia Pathfinder Core PRO is ideal for stations that want reliable, redundant, system-wide routing control that is purpose-built. The Linux-based network-attached appliance for routing control includes a web user interface to provide route control and customize logic events. Because it uses a web interface, Pathfinder Core PRO becomes platform-independent; users can use almost any personal computing device to interface with the appliance for reliable, 24/7 unattended operation. Customizable function panels are based on HTML5 and can be accessed from almost any computing device with access to the network.

Pathfinder Core PRO features Logic Flows, an all-new events system that uses logic gates for the creation of complex logic and dramatically simplifies route changes. The Logic Flows event system features a graphical flow-chart style that allows you to see the connections and manipulate them easier, as well as see state changes in real-time via the web interface. For example, if an endpoint changes, you will see those changes live via color and/or textual change on the Logic Flow graphic. Logic Flows are intelligent enough to sense the connections between different flows and present those connections graphically with a much larger array of properties that are available for use. Finally, we have added the ability to clone entire groups of object settings with one simple flow, which becomes invaluable when creating redundant logical paths. These are dramatic improvements over previous versions.

Because there are a variety of automation systems that don’t understand the Axia language, Pathfinder Core PRO Device Emulators allow the unit to “look like” another protocol, emulating third-party protocols and translating them into the Axia language. When Pathfinder Core PRO receives commands in a non-Axia protocol language, it then makes the requested changes to the Axia equipment, emulating a different kind of device by speaking that language. Additionally, the Device Emulators allow the user to define their commands to send and receive, so Pathfinder Core PRO can be used to control and receive commands from third-party equipment in that way as well. The user simply has to define the textual commands to watch for or send in the Device Emulator.

Pathfinder Core PRO is fast, efficient, and simple to use: Just attach to your network, give it an IP address, and it automatically detects your Axia audio sources/destinations and GPIO ports. Pathfinder Core PRO searches for and finds all of the Axia equipment on the network, then automatically creates both an audio router and a GPIO router with all of the audio or GPIO sources and destinations that are discovered within that equipment, simplifying the initial configuration.

In addition to advanced routing control, Pathfinder Core PRO lets users create their user panels, giving them a unique and customized look and design for features like meters and buttons. This powerful drag-and-drop tool integrates routing, logic, and device control to create a user interface that intuitively matches your facility’s unique workflow.

Aside from routing physical inputs and outputs, Pathfinder Core PRO lets you create virtual routers. For example, if a specific room in a facility doesn’t need to see the entire network of inputs and outputs, but only the ones relevant to that room, then a Pathfinder administrator can create a virtual router that only includes the sources and destinations required by that room. In addition, virtual routers can be used to marry multiple sources and destinations together into routable packages. For example, you can create a virtual source that has both an actual audio source and an actual GPIO source as part of its package. Then when you create a route with the virtual router, the audio and GPIO get routed together with one route change. This capability extends even further by allowing any property known to the system to become a source or destination in a router.

Scene changes are traditionally used for making a group of route changes at once. Pathfinder Core PRO extends this functionality by allowing any change over any device Pathfinder knows about to be included in a scene. Need to route a studio to air while turning on certain console channels, dialing a Z/IP ONE codec, and sending a start message to your automation system all at the same time? A scene can do that for you.

With Pathfinder Core PRO, you get 1000 points used towards sources and endpoint change blocks (within Logic Flows). Need more? You can simply buy an extension license to add more logic or more crosspoints.

When coupled with an Infinity IP Intercom System, Pathfinder users have direct access to, and control of, their intercom system’s audio. With access to GPIO and external microphone functions, Pathfinder virtual panels can be used to remotely control Infinity intercom panels, giving users full remote functionality of their panel keys.