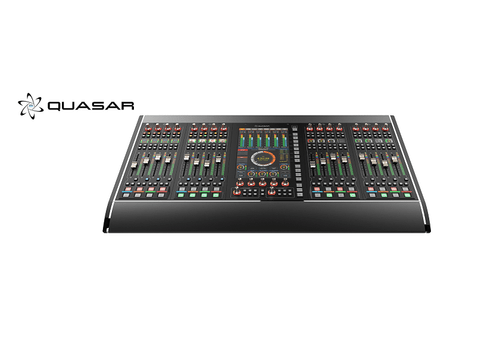 SKU:
Quasar XR
UPC:
Availability:
Built to Order
Frame Sizes Range from:
2.5U to 8.5U
Requesting a Quote::
Please select the items you wish to include. A Sales Rep will add the correct engine size and frame per your selection.
Type:
Digital On Air

With the introduction of the Quasar v2.0 Major System Update, the original flagship Quasar console becomes ‘Quasar XR’. Existing Quasar users can upgrade their console to XR by installing this free system-wide update, which adds scalability and modularity to the original console. V2.0 also introduces Quasar Soft and Quasar Cast remote control and monitoring solutions, delivers full integration with Telos Infinity® IP Intercom products, and adds support for new Quasar Accessory Modules, along with numerous other powerful features. This advanced scalability addresses new workflows, like Work from Home, and gives broadcasters more flexibility when it comes to the number of channels they need in their Quasar Engine, starting at 16 channels and scaling up in blocks of 16 channels up to 64 channels.

Axia Quasar XR Radio Console is designed to be the top-of-the-line mixer, with four key differences from the step-down Quasar SR model. For one, XR has extensive metering built into the surface right where it needs to be—on every channel display and next to each fader, as well as on the monitor module. These LED meters allow users to live mix rather than merely confidence monitor, giving users active control over their environments for the best possible outcome.

Secondly, the Axia Quasar XR Radio Console has motorized faders as standard—a must for addressing complex workflows that require the use of Layers or for use with a sophisticated remote solution. These motorized faders greatly increase console operation speed when recalling entire console configurations that contain preset fader positions.

Tap into the power of AoIP with Axia Quasar™, our sixth-generation of AoIP consoles and the industry-standard in mixing excellence. Powered by mature and sophisticated AoIP technology from Telos Alliance—the inventor of AoIP for broadcast—Quasar is designed for steadfast reliability with no single point of failure.

Quasar is part of the vast Livewire+™ AES67 ecosystem, making communication with other devices on the network easy by allowing detection, sharing, and control of audio resources across multiple studios connected to the network. With Quasar, AoIP’s promises of built-in redundancy, cost-efficiency, ease of use and setup, and system scalability are fully realized.

The Pinnacle of Console Design

Designed based on extensive global customer feedback and ergonomic studies, Quasar consoles, including the Axia Quasar XR Radio Console, deliver pride of ownership with their exquisite appearance and high-quality architecture, including scratch-resistant work surfaces and components rugged enough for a lifetime of use. All parts subject to wear are industrial, automotive, or even avionics grade.

The absence of an overbridge makes for easy desk installation, and the console is fanless for quiet operation, with redundant load-sharing power supply units. High-resolution color TFT displays and RGB pushbuttons are used throughout.

Reinforcing its innovative design, Quasar received the RedTech Award for Ergonomics and the IBC Best of Show Award.

The Axia Quasar XR Radio Console has a sleek, easy-to-operate industrial-grade 12.1-inch touchscreen user interface that is so familiar, you’ll be acquainted with the operation of the console within minutes. Two types of UIs are available—Expert and Simplified—to cover all user workflow requirements. Quasar does not require an external display to function thanks to its touchscreen, although you can connect an external monitor via the rear HDMI port to show a duplicate of the touchscreen interface. In addition, all Quasar consoles offer Touch-sensitive Encoders, Faders, and User Buttons, offering responsive user interaction and bringing Quasar’s dynamic UI closer to your fingertips.

Customizable and Easy to Use

Quasar is Axia’s new, state-of-the-art broadcast mixing system. And it is built like a tank.

Available in sizes from 4 to 28 faders per frame, with support for up to 64 faders in multiple linked frames, the console offers a reduced footprint and directly connects to an Axia network with a single or dual redundant Ethernet cable. Frames are available in both tabletop or flush-mount versions and can be converted from one type to the other with a special kit.

The Axia Quasar XR Radio Console sports a Master Touchscreen module that presents a simple and intuitive GUI (Graphical User Interface) that is so familiar, you’ll be acquainted with the operation of the console within minutes. Thanks to its touchscreen, Quasar does not require an external display to function, although an external monitor could be connected via the rear HDMI port to show a duplicate of the touchscreen interface.

Expert Source Profile controls allow power users a granular definition of custom logic associated with each source. Users can program GPIO control, mix-minus routing, talkback, and other functions based upon console channel state. Flexible Record Mode gives complete control of monitors, meters, headphone feeds, program bus assignments and more. Show Profiles allow up to 4,000 console “snapshots” with different settings, layouts, and defaults loaded instantly, customizing the board to each show requirement or talent preference, if desired. An HTML5 remote GUI is built into the Web UI to allow remote control and operation of the console from any browser-enabled device.

The Quasar control surface is completely fanless, with built-in industrial-grade Power Supply Units available in either single or redundant configuration. Up to four PSUs can be included in a single console frame, depending on frame size and configuration desired.

Axia Quasar XR Radio Console is designed and built to last a lifetime. All its components were carefully selected with very strict lifetime requirements. All parts subject to wear are industrial, automotive, or even avionics grade.

The Axia Quasar XR Radio Console connects to Axia’s Livewire+™ AES67 AoIP network, and takes advantage of its powerful distributed I/O architecture. The Livewire+ network allows detection, sharing and control of audio resources across multiple studios connected to the network, and its technology complies with the latest AES67 standards.

Quasar XR is powered by the Quasar Engine, a native AoIP powerhouse with 16, expandable to 64, stereo channels, 4-band fully parametric EQ, powerful dynamics processing, automixer on every channel, four program buses, and eight auxiliary buses. Four Surface Layers and a Virtual Mixer (VMix) with 16 independent 5-channel V-Mixers extend the mixing capacity of your Quasar console far beyond physical fader count. Support for AES67 is included, as well as Talent headphone processing and many other advanced features that make operation simpler and more intuitive. Redundant power is standard with this mix-engine platform. The Quasar Engine has forced fan cooling, while the Quasar console is completely fanless.

An optional upgrade for Quasar SR consoles,Quasar Soft is a customizable remote control solution that lets you control the Quasar surface from your browser. You can generate up to eight HTML-5 pages and configure them to display any of the 64 input channels, plus a small monitor section, or even the entire master section of the console.

Included as part of the Quasar Soft license, Quasar Cast is a remote monitoring solution that lets you listen to any Livewire stream in the network through the same web browser. Quasar Cast generates a compressed OPUS stream from a source in the Livewire network and can serve up to eight clients (including Quasar Soft instances). With Quasar Cast, you can listen to what is happening in the studio, and on the air, while you operate the console remotely using Quasar Soft.

Quasar's Motorized Fader Accessory Module provides all of the functionality of the Mic/Headphone Module with the addition of a high-quality motorized fader that allows control of any of the Quasar Mic channels.  With the features included, this module can effectively function as an additional channel strip for your surface, mountable in a remote location.

Quasar Mic in/HP out Console Module is an optional 1ch-wide module that can be placed anywhere on the surface to add a convenient Talkback Input and Headphone Output to your Quasar. It comes with its own headphone amp board that must be plugged into the Quasar Rear I/O module, to let the console receive any line signal and turn it into a high-quality, hi-power headphone output