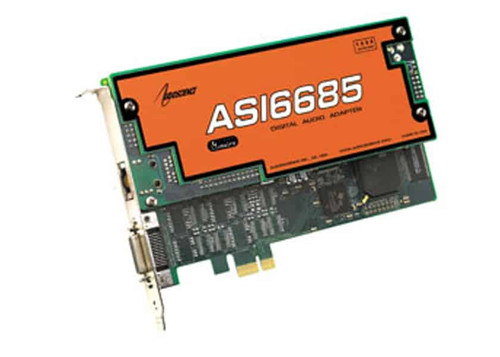 The ASI6685 is a professional PCIe sound cards designed for use in Axia Livewire™ IP-audio based radio broadcast automation systems. It uses the Axia Livewire protocol to record and play audio streams over a standard Ethernet network.Providing up to 16 play streams that are mixed to 8 stereo outputs and up to 16 record streams fed from 8 stereo inputs, the ASI6685 features AudioScience’s unique “anything to anywhere” mixing and routing.A choice of uncompressed PCM, MPEG layer 2, and MP3 is available for both recording and playback. All compression is handled by an on-board floating point DSP, allowing the host computer to focus on other tasks.DSP based functionality includes MRX™ multi-rate mixing technology that allows streams of different sample-rates and formats to be mixed digitally. TSX™ time scaling allows compression/expansion of any or all playback streams in real time with no change in pitch.For emerging surround sound applications, SSX™ mode allows multichannel streams of up to 8 channels to be played, recorded and mixed.