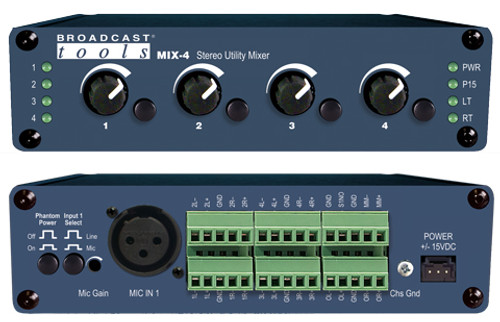 The Mix-4 is a four-channel stereo line level mixer with a professional microphone input, along with a stereo line output and mix-minus monaural output to drive a telephone hybrid. The Mix-4 mixer is ideally suited for the typical broadcast studio or any similar applications.

The Mix-4 features four high impedance stereo line level mixing inputs which accept balanced or unbalanced stereo sources. Each input is equipped with rotary level controls, along with on/off switches and LED indicators. Input one may be configured as either a stereo line input or a microphone input with or without 15V phantom power via rear panel switches. The microphone input uses a high-performance pre-amp from THAT Corporation. Inputs one through four feed the balanced output, while inputs one, two, and three feed the balanced mono mix-minus output, which allows input four to accept caller audio from a telephone hybrid. Channel audio switching is performed by professional level electronic analog switches. The inputs and outputs are supplied with removable screw terminal block connectors, while the microphone input is a female XLR jack. Each unit may be set on a desktop, mounted on a wall or rack-mounted with the optional RA-1 rack shelf for mounting up to three units in 1-RU.