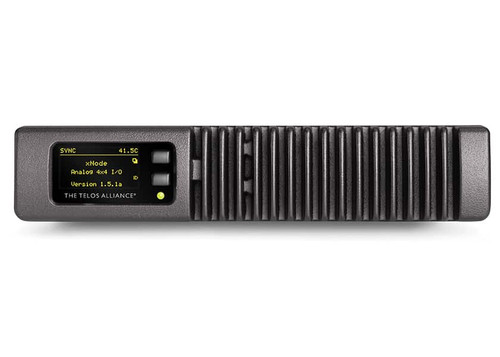 The xNode lightweight, half-rack, high-performance IP-Audio interface from Telos Alliance is loaded with advanced features and capabilities. One-button configuration takes a new xNode from out-of-the-box to on-the-air in under one minute. They’re fanless, which means they’re noiseless too. Versatile mounting options let you deploy two xNodes in just 1RU of rack space, or on ceilings, walls, and under counters with an available wall-mount kit. xNodes have studio-grade audio performance specs. Redundant power options (using AC mains and Power-over-Ethernet) and dual-redundant network interfaces are included, both with automatic switching. And xNodes are fully AES67-compliant, so they work with all AES67 audio gear—now, and in the future. In fact, they are the first and only AoIP I/O devices that are Livewire+™, RAVENNA, and AES67 compliant. Every xNode not only supports RAVENNA audio stream interoperability, but also enables advertising/discovery of those streams natively, above and beyond AES67.

The Analog xNode has 8 mono or 4 stereo balanced line-level inputs and 8 mono or 4 stereo balanced line-level outputs, on RJ-45 and DB-25 connectors. It can also accommodate 5.1 Surround inputs and outputs, each with an associated discrete Stereo mix. Each input is switchable to accommodate either consumer-level -10dBv or professional level +4dBu sources. The short-circuit protected outputs can deliver up to +24dBu before clipping. Telos Alliance uses only studio-grade A/D/A converters and low-noise components, so that each Analog node provides superior audio performance for high-end studio use.

2-year warranty covers all Telos Alliance hardware products, including those from Telos Systems, Omnia Audio, Axia Audio, Linear Acoustic, and 25-Seven Systems, and comes as a part of your purchase along with free industry-leading TelosCareTM technical support. Users can also purchase TelosCare PLUS, a paid service level agreement that offers priority technical support, deep discounts on out-of-warranty repairs, loaners, and on-site setup, plus total peace of mind. Contact your BGS Representative today to find out more about this service.