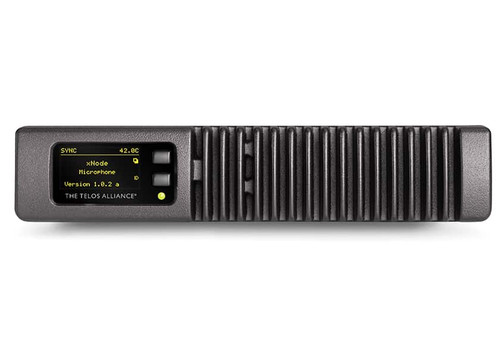 The Telos Alliance Microphone xNode is a lightweight, half-rack, high-performance IP-Audio interface loaded with advanced features and capabilities. One-button configuration takes a new xNode from out-of-the-box to on-the-air in under one minute. They’re fanless, which means they’re noiseless too. Versatile mounting options let you deploy two xNodes in just 1RU of rack space, or on ceilings, walls, and under counters with an available wall-mount kit. xNodes have studio-grade audio performance specs. Redundant power options (using AC mains and Power-over-Ethernet) and dual-redundant network interfaces are included, both with automatic switching. And xNodes are fully AES67-compliant, so they work with all AES67 audio gear—now, and in the future. In fact, they are the first and only AoIP I/O devices that are Livewire+™, RAVENNA, and AES67 compliant. Every xNode not only supports RAVENNA audio stream interoperability, but also enables advertising/discovery of those streams natively, above and beyond AES67.

The Telos Alliance Microphone xNode has four professional-grade microphone preamps with selectable Phantom power and software-adjustable gain. There are also four balanced analog line outputs to conveniently deliver headphone and studio monitor feeds back to your talent. Inputs and outputs are presented both on easy-to-install RJ-45s and high-density DB-25s, both of which connect to easily available 3rd-party breakout cables, to suit your connection preference