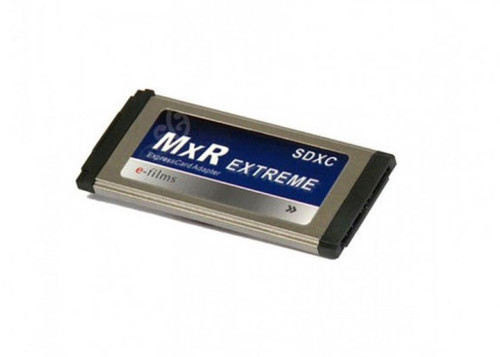 This E-films MxR Extreme Expresscard Adapter is a USB Expresscard for the Sony EX1/EX3/EX1R/PMW-350. Supporting all brands and sizes of SDHC/SDXC and UHS interface memory, the MxR Extreme is designed as a replacement for the Sony SxS Pro for the aforementioned range of Sony EX cameras. By speeding up downloads and providing 'flawless' recording from 1-60 frames per second, the MxR efficiently writes data to the inserted SD card.

What Does it Do?

How Does the E-Films MxR Extreme Do This?
It intercepts USB activity from the camera and converts that data stream, writing it to the SD card on the fly. It is so efficient at this conversion process, that it can convert even the highest speed overcranking of 60fps onto modest performing SD cards without a problem

Are There Any Risks Associated with Using SD Cards of Such Large Size?
There are always risks associated with using flash memory of any kind. And there were also risks to using tapes in the past. But the same applies now and then. Always ensure you are using well known and recommended brands and products. Test them before an important shoot, and carefully secure the media after the shoot