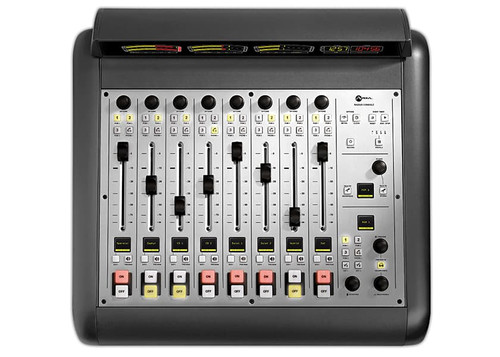 Axia Radius radio console is an all-in-one console system designed for small standalone or networked studios, where no more than eight faders are needed. Like all Axia consoles, it’s easy to deploy: each Radius control surface is powered by a burly QOR.16 integrated console engine with DSP-powered mixing engine, analog and digital audio I/O, custom Ethernet switch and GPIO ports. The Radius surface connects to the QOR.16 engine with a single CANBus cable.

“You get what you pay for,” as the saying goes. But sometimes, you actually get less. For example, you’ve probably noticed how “affordable” radio consoles are usually missing important features and capabilities. Trying to do a radio show with a board like that is like trying to open a can with a spoon: you might succeed eventually, but you sure won’t enjoy it.

At Axia, we’re broadcasters too, through and through. And we believe that having a reasonable equipment budget shouldn’t mean being forced to settle for something less than you deserve. We’ve decided you should get more than you pay for — much more. Which is why we designed Radius, the IP console that proves you can have your cake and eat it, too. While some console companies try to see how much they can take out of a console to meet a price point, Radius was designed in exactly the opposite way: we challenged ourselves to see just how many features and capabilities we could pack in, while still meeting your budget requirements.

Axia Radius radio console is very easy to use. Just connect the 8-fader mixing surface to the QOR.16 integrated console engine, plug in your sources and power, and you’re ready to make great radio. Because it’s so compact, Radius is the perfect standalone console, but Gigabit ports on its QOR.16 integrated console engine let you connect it to other studios too. Radius’ network gateway lets you load up to 12 audio sources from anywhere in your Livewire network, while simultaneously sending your locally produced streams back out to the net.

Axia Radius radio console is loaded with features you’d expect to pay much more for. You’ll find three stereo Program buses, and a stereo utility bus that can be used for recording phone calls and off-air bits (or as a fourth Program bus). Automatic mix-minus for every phone caller and remote talent means never having to fiddle with making a manual backfeed. Bright multi-segment LED meters are switchable between VU and PPM styles. High-resolution OLED displays for each fader show source assignments, audio options and more. And Show Profiles that you can program to instantly load talent’s most frequently-used console configurations.

Like all Axia consoles, the Axia Radius radio console is built for long-lasting reliability, ready to stand up to anything your operators throw at it, with an EM-tight steel frame, anodized machined aluminum work surface with etched markings that can never rub off, silky-smooth conductive-plastic faders, aircraft-quality switches and rotary controls, and integrated clock/event timer. There are even monitor source and volume controls for an associated studio — something you’d expect to find only in bigger consoles costing much more.

There are also OLED displays on every fader that provide source assignments, pan & balance settings, fader options and more — which means no additional computer monitors or mice to clutter up your studio. The display can also work with the Soft Keys just below to trigger GPIO events, step automation events, and adjust source input options.

Like its big brother, iQ, Axia Radius radio console is designed to sit atop any solid surface — no templates to decipher or countertops to cut (unless you really want to). A single cable connects it to the QOR.16 mixing engine. Also like iQ, Radius is built with premium materials like a machined aluminum frame construction, LED button lighting, long-life conductive-plastic faders, and anodized – not painted! – surfaces with laser- etched markings that can’t ever rub off.

Audio I/O, GPIO, console CPU, super-duty power supply, and even a network switch are all built into the QOR.16. Just plug in your mics, CD players, codecs, profanity delays, whatever. There are 16 audio I/O ports: two Mic inputs with switchable Phantom power, eight analog inputs and four analog outputs, and one AES/EBU input and output. QOR.16 also has four GPIO logic ports for machine control of studio peripherals, six 100BASE-T ports for Livewire devices, and two Gigabit ports with SFP for connection to the outside world. For more I/O, just add Axia xNode interfaces. And you can daisy chain as many as four QOR engines without the need for an external Ethernet switch, making installation even more economical.