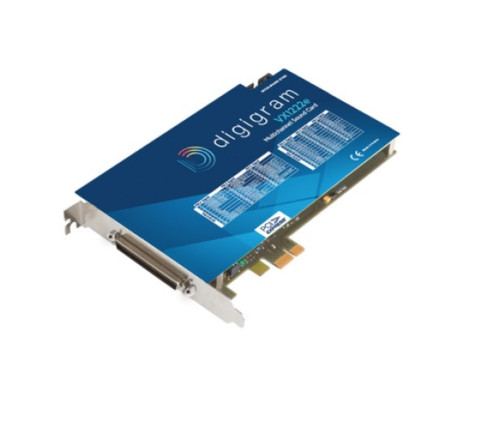 Multichannel linear PCM sound cards for multichannel playout systems. VX1222e is a broadcast quality linear (PCM) multichannel sound cards based on the PCI Express bus interface. It is designed for use in any professional PC-based audio system running under Windows or Linux and requiring up to six stereo analog and AES/EBU outputs, such as live-assist in broadcast automation.

VX1222e is the reference multichannel PCM sound card designed for operating in continuous 24/7/365 use-environments as part of professional audio systems. It can be used under Windows or Linux operating systems, with software applications based on standard driver interfaces such as WDM Kernel streaming, DirectSound,  Wasapi, and ASIO for Windows, and Alsa for Linux.  It offers six stereo AES/EBU outputs and one stereo AES/EBU input, and can synchronise on an external clock (AES11, Word clock, black burst video).