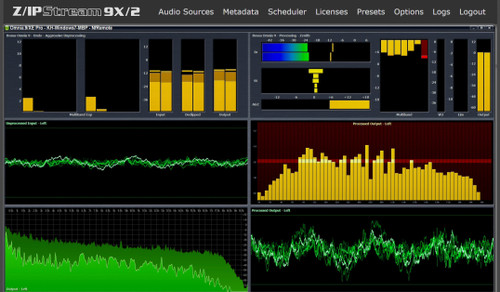 Z/IPStream 9X/2 includes all the functionality of its little brother the X/2, but adds technology found in the popular Omnia.9 audio processor. The 9X/2 is not simply a streaming processor-encoder, but a complete audio management system that will actually improve the flaws found in most recorded source material – both music and voice – as well as address the specific technical challenges of Internet distribution.

Z/IPStream 9X/2 comes with both a GUI application and a service that contain the exact same processing. During initial set-up (sound card configuration, etc.), use the GUI application. Once initial configuration is done and tested, switch over to using the Service, which you can then control with NfRemote from any computer.

Everything can be controlled with NfRemote except for which sound cards to use. Z/IPStream 9X/2 and NfRemote are standard Windows 32-bit native applications and do not use Microsoft.NET or similar. Z/IPStream 9X/2 is primarily designed for streaming and only has one local sound card output. However, NfRemote has built-in dedicated PCM audio streaming for monitoring, so that you can monitor with low delay from any computer, for example, while adjusting the processing.

9X/2 can encode audio to MP3, AAC, and HE-AAC v1/v2 h (aacPlus). Low complexity AAC (AAC-LC), highefficiency AAC (HE-AAC), and extended HE-AAC (xHE-AAC) are all supported. AAC has been standardized under both MPEG-2 and MPEG-4. The format most commonly used is MPEG-4 AAC-LC. Often this is called just ‘AAC’. HE-AAC adds Spectral Band Replication to AAC and it is sometimes called AAC+ (sometimes seen as ‘aacPlus’ or ‘AACplus’). There is also an HE-AAC v2 format which adds parametric stereo optimizations to HE-AAC. Sometimes this is called AAC+ v2 or Enhanced AAC+. Finally, xHEAAC, the latest Fraunhofer codec, works well at low bitrates and therefore has more encoding power. Whereas, other codecs like AAC and MP3 sound much better for music than they do for speech, xHEAAC sounds great for both speech and music, even at the lowest bitrates. 9X/2 can also use Windows Media codecs installed on the system, 48kbps or higher.

A few words about Undo

First, the de-clipper removes distortion by detecting clipped edges of the waveform and resynthesizing the missing part. Unlike simpler algorithms, no distortion is ever created as the resynthesizing is performed entirely in the frequency domain.

Second, the amount of short-term dynamics is detected for each of 5 frequency bands, and automatically controls the threshold and expansion ratio of 5 upwards expanders, to undo excessive compression and peak limiting.

Both techniques together result in an incredible “is that really the same recording” level of improvement. Audio quality of low bitrate codecs is also vastly improved, as a less distorted waveform is less complicated for the codec to encode (thus using fewer bits) and more dynamic, punchy sound gives the codec a place to hide the bitrate reduction artifacts.