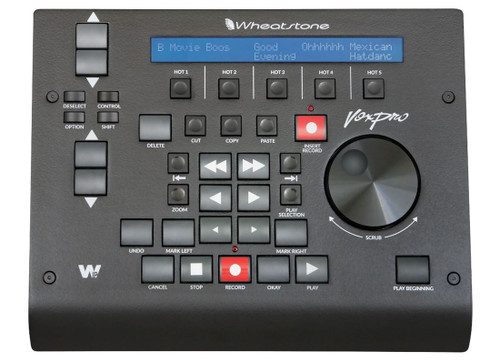 *Software not included with Controller

Fast, reliable, and easy-to-learn, the VoxPro software is most often used with the optional USB control panel. Users may create password protected folders for their own work. Unlimited undo and redo, remote start, and one-button insert record are just a few of VoxPro’s more used features. 10 GB of hard drive storage holds about fifteen hours of stereo files

VoxPro includes a feature that enables talent to simultaneously record audio while editing or playing back other audio. A GapBuster function automatically removes silence from interviews and phone calls. Hotkey and Marker labels can be authored in any of the world’s languages. Color-coded Markers let you work more efficiently, and a detachable Hotkey panel lets you work the way YOU want to. There’s also an option to hide the Editor and File List to reduce on-screen clutter, and greater integration with Wheatstone’s WheatNet-IP audio network, including control for routing, salvos and playback tallies with end warning flash.

FX Macros are available to create one-button macros for frequently used effects and other editing operations. FX Macros can be used to create a preset for any available effect that can then be assigned to an on-screen button for quick recall. FX Macros can trigger an action or a chain of actions. For example, one click could trigger a chain of actions, starting with the removal of silences from a call-in audio file (using GapBuster), then running the results through ClipCleaner, and finally normalizing both host and caller channel levels for final broadcast. In addition to a new FX Editor, Wheatstone designers also overhauled the VoxPro Effects menu, making special effects like chorus, reverb and distortion much more accessible and making recent effect settings “sticky” for automatic recall.

A new onscreen QuickSearch box and the ability to color-code files and hotkeys makes navigation even faster when searching through long file or hotkey lists.

Other additions under VoxPro7 include support for importing 24-bit files, a new feature in GapBuster to automatically detect the noise floor, and the use of a hardware-based graphics library for smoother and more efficient performance.

VoxPro natively supports WheatNet-IP audio networking for easy access to any source anywhere in the network.

“We’ve combined all the intuitive capability that VoxPro is known for with several new features, then we Wheaty-ized it to turn it into an even more powerful tool in the broadcast studio,” says Rick Bidlack, lead engineer for VoxPro.