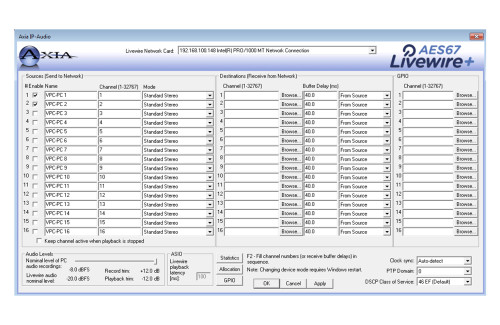 The Axia Livewire+ AES67 IP-Audio Driver is one of the first AES67-Compliant* IP Drivers. It lets you send and record single or multiple channels of stereo PC audio directly to and from Axia networks via Ethernet — no sound cards needed. Up to 24 channels of stereo audio can be sent simultaneously over a single CAT-5 Ethernet connection.

* Telos Alliance's goal is to further the adoption of AES67, the standard for Audio over IP designed to allow interoperability between various IP-based audio networking systems. And while these two words may sound the same, the differences between AES67 compliance and compatibility is huge. AES67, like all standards, can be minimally implemented. And when standards are minimally implemented, they minimally get the job done. Simply put, compliance means that every single aspect of the AES67 standard—like Unicast mode, for example—is met. Livewire+ AES67 is fully AES67-compliant.

Way back when enormous cart machines still roamed the earth freely, we used XLR connectors to get recorded audio into the console. But when PCs replaced the cart machine, we continued to connect to their sound cards with plain-Jane XLRs and a thick bundle of discrete wires that can’t carry logic, PAD or any of the useful information that PC playout systems provide. Why? With the Axia Livewire+ AES67 IP-Audio Driver for Windows, there’s a better way, and it’s now AES67-compliant. We’ve added the ability to sync to PTP, support to define multicast address outside of the Livewire range, and added SIP/Unicast support for RTP streaming.

The PC is the heart of the modern radio studio. And Axia makes it easy to connect and exchange pristine digital audio with it. The Axia IP-Audio Driver for Windows is a special Windows driver that feeds your digital audio directly from your PC’s Ethernet port to the Livewire / Livewire+ AES67 network. Up to 24 stereo playback channels and 24 stereo record channels can be accessed using our multi-stream driver that’s provided by your favorite digital delivery system provider; a single-play/single-record version is available for audio workstations.

The IP-Audio Driver also provides GPIO-like start/stop and other control functions over the same network. It’s available with the latest versions of high-end Windows audio delivery and editing software applications such as those from BSI, Burli, DAVID Systems, Dalet, ENCO, iMediaTouch, Netia, RCS, WideOrbit, and Zenon Media (to name just a few) and for Linux-based Rivendell through Paravel Systems—more than 50 systems and counting.

The Windows version of the IP-Audio Driver is available to broadcasters directly from Axia in 1-Stream and 4-Stream versions.