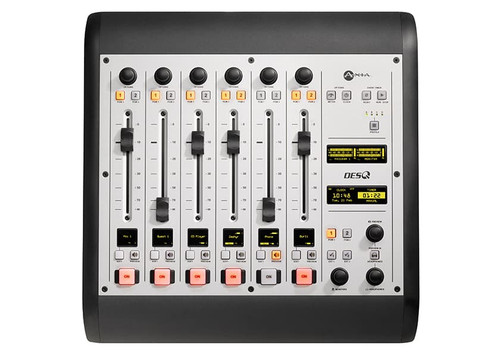 DESQ requires no countertop cutout and takes only 16” square of desk space; it connects to the QOR.16 integrated console engine with a single power/control cable. DESQ is ideal for standalone installation, but works with larger Axia networks too. A DESQ control surface and a QOR.16 integrated console engine constitute a complete RAQ system, but two DESQ consoles, or one RAQ and one DESQ console, may be paired with a single QOR.16 for cost-effective multi-console deployment.

A big console for small spaces.

Not every studio requires a full-size mixing console. Not every studio is full-size, itself! But you still want the advantages of IP-Audio networking: the ability to send program audio to other studios, the ability to consume audio from satellite downlinks, remote codecs and phone hybrids, or to trigger routing scene changes from a user-mapped control panel. And you don’t want a toylike plastic pro-audio mixer — you want a real broadcast console that fits into a rack or turret, or on a small desktop space. A console with a small footprint, but big capabilities.

DESQ is a compact, special-purpose IP console from Axia. It may be compact in stature, but it’s big on features and performance. DESQ has “big board” capabilities you won’t find in other consoles of this size — automatic per-fader mix-minus, built-in EQ for voice and codec sources, and the ability to instantly load new local or networked sources to any fader with just the turn of a knob. Which means DESQ easily out-classes mixers with similar form factors — and even ones that take up much more room.

DESQ is a six-fader console in a form-factor that lets it fit just about anywhere there’s a few inches of spare space: DESQ is only 16 inches (39.9 cm) square. It’s built Axia-tough, with a machined-aluminum work surface that takes the rough stuff jocks can dish out. Our familiar 100 mm. conductive-plastic faders feel like silk under the fingertips, and you’ll also find the avionics-grade switches with LED lighting that have become an Axia hallmark.

Other features include OLED channel and meter displays, four-source monitor section with two external locations that can be reassigned “on the fly”, and an OLED time-of-day clock and event timer. Like its rackmount cousin, RAQ, DESQ also has four Show Profile console snapshot locations, and push-and- turn Options knobs at the top of each fader that give instant access to fader source assignments, pan/ balance, and input gain trim.

Despite all these features, DESQ is so cost-effective, broadcasters are coming up with creative, new uses for them. Its big features and small footprint make DESQ the perfect console for interview studios, live performance spaces for on-air broadcast, news and feature production — whatever. Take it on road trip remotes, or to sporting events where multiple mics are required. Or put it in mobile units or ENG kits. Perfect for personal production studios, too.

Audio I/O, GPIO, console CPU, super-duty power supply, and even a network switch are all built into the QOR.16. Just plug in your mics, CD players, codecs, profanity delays, whatever. There are 16 audio I/O ports: two Mic inputs with switchable Phantom power, eight analog inputs and four analog outputs, and one AES/EBU input and output. QOR.16 also has four GPIO logic ports for machine control of studio peripherals, six 100Base-T ports for Livewire devices, and two Gigabit ports with SFP for connection to the outside world. For more I/O, just add Axia xNode interfaces. And you can daisy chain as many as four QOR engines without the need for an external Ethernet switch, making installation even more economical. And here’s the kicker: one QOR.16 can power two DESQ mixers — or a DESQ and a RAQ (DESQ’s six-fader, rackmount cousin)!